Due to new hit shows such as “Hot in Cleveland” and “Retired at 35,” along with acquiring the modern classic “Everybody Loves Raymond,” TV Land has seen its largest increase in primetime ratings since its first quarter rating in 2006. The network has managed to post double-digit increases in rating and delivery in prime. For this quarter in primetime , TV Land attracted 943,000 total viewers in prime which is up +35% over the first quarter 2010 in prime. A lot of this success has much to do with the number one cable sitcom in 2010, “Hot in Cleveland” which totaled over 4 million viewers in its first two seasons combined. 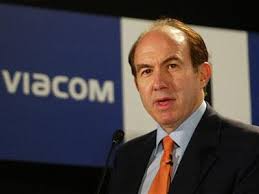 In one of our earlier posts, it was stated that former Viacom CEO Rajesh Kamat left Viacom to join CA Media. His departure certainly has not shaken CEO Phillipe Dauman. Dauman was recently named the highest paid CEO in America in a report by the New York Times. His compensation for the 2010 fiscal year was estimated to be around $84.5 million, which more than doubled his compensation for the 2009 fiscal year totaled at $34 million. This makes him the highest paid CEO among all industries, not just the media and entertainment industry which Viacom falls under. Coming in at No. 2 was Occidental Petroleum CEO Ray Irano with $76.1 million in compensation last year. The closest media CEO to Dauman was DirecTV’s Mike White with $32.9 million which landed him at No. 4 on the Times list.

Youtube is a safe haven in which aspiring artists, activists, reporters, and potential teenage heartthrobs may seek recognition from massive audiences. The Digital Millennium Copyright Act was issued to protect organizations like Youtube from lawsuits by stating that as long as individual user’s upload the videos, the organization cannot be held accountable for copyright infringement. Viacom does not approve. The media behemoth recently made an appeal to a previously settled lawsuit that kept Youtube and Google from having to fork over $1 billion. The initial lawsuit was made in 2007. Viacom considers the courts ruling in the initial case “fundamentally flawed,” and continues to fight the decision. The list of organizations that support Google/Youtube in their case is absurdly long. A few of the major players on the list are: Facebook, eBay, Yahoo, Freedom House, Human Rights watch, and Reporters Without Borders. A Youtube spokesperson summed up their position nicely when he said, “The court here, like every other court to have considered the issue, correctly ruled that the law protects online services like YouTube, which remove content when notified by the copyright holder that it is unauthorized. We will continue to strongly defend the court’s decision throughout this appeal process.” Viacom has yet to publicly comment on the case, and one can only assume that their image is suffering.

Will Gillette and Rick Grider

It’s comedy’s big night out as the first annual “The Comedy Awards” airs across multiple MTV Networks from Comedy Central, Spike Tv, VH1, CMT, and TvLand on Sunday, April 10 at 9:00 p.m. ET/PT. Comedic talent including Alec Baldwin, Tina Fey, Will Ferrell, Kristen Wiig, Stephen Colbert,Jon Stewart, Ty Burrell, Louis C.K., Tracy Morgan and Andy Samberg will all be on hand to help kick off this inaugural event dedicated to honoring and celebrating the world of comedy.  Highlights from the upcoming show includes  Bill Murray presenting David Letterman with the first-ever “Johnny Carson Award For Comedic Excellence”. Eddie Murphy receiving the “Comedy Icon Award” which was presented to him by Tracy Morgan.  Will Ferrell announcing the best original viral video.  Craig Robinson addressing the kids about drugs and movies.  Stephen Colbert stealing Jon Stewart’s speech for accepting the award for best late night comedy series for his show “The Daily Show”.

The group hopes to ‘capitalize on the growth characteristics of these markets such as China, India, and Indonesia.’ The company also plans to ‘explore opportunities in content creation (specifically, film and TV production), TV networks, sports, education, advertising and digital media.’ CA Media also had plans to team up with local entrepreneurs, strategic partners, and financing sources to launch new enterprises.

No replacements have been named, but the company did also announce it will co-produce ‘Dabangg’ director Abhinav Kashyap’s forthcoming movie ‘Project 18’ and Australian filmmaker Bill Bennett’s venture.

With Viacom owning so many huge networks, we find it hard to believe that it is actually losing revenue, but it is. Paramount Pictures and MTV Networks have both been experiencing low home entertainment sales and also “poor performance by its entertainment unit.” They saw revenues fall 5 per cent to $3.83bn in the first- quarter revenues report.  With MTV refusing to cancel their new controversy series “skins”, MTV has reportedly been losing 2 million dollars per episode. With Paramount Pictures having huge hits this year including “Justin Biebers: Never say Never 3D” movie, they are not succeeding with their DVD department sales. They also didn’t have a huge holiday blockbuster hit to really push them towards the revenue goal. Just how is Viacom trying to push their revune back up to its top standards? Viacoms very own  CEO is willing to rely on advertising. With MTV top popular shows Jersey Shore and Teen Mom, advertisers are becoming more interested in targeting  younger audiences, meaning the ad revenue is sure to increase . Also advertisers are making a shift from broadcast television to cable television, which is were Viacom conquers. So is the  revenue decrease just temporary? We Shall See!

To invest or Not Invest?

Viacom Inc. today announced that it has agreed to sell $500 million in senior notes. Viacom intends to use the net proceeds from the offering for general corporate purposes, including the repayment of outstanding indebtedness. The joint book running managers for the senior notes are Deutsche Bank Securities Inc., and J.P. Morgan Securities LLC., and BNP Paribas Securities Corp. Viacom last moth reported a decline in first-quarter profit after a drop in home-entertainment sales lowered earnings at its Paramount Pictures film unit. The media company last sold debt in February, issuing $500 million of senior notes. Viacom has  $5.51 billion of bonds outstanding, with $193 million maturing. “There’s a lot of debt at this company that was issued in earlier years with higher coupons,” says debt research analyst Jake Newman.

The terms and conditions of these senior notes can be obtained by contacting Viacom Investor Relations at 1-800-516-4399 or by written request to Viacom, Inc., 1515 Broadway, 52nd Floor, New York, New York 10036, Attn: Investor Relations.

Calvin Klein and Viacom International Media Networks will soon be joining hands along with Viacom’s MTV to make Calvin Klein the sole sponsor of MTV Push.  Can Calvin Klein, established in 1968, prove to be “forever young”?  MTV Push is all about the newest artists prospering in one of the most competitive fields all over the world.  The famous cK will be presenting CK one’s first global advertisement campaign as well as a new website, underwear and swimwear, and a new style of jeans for every lifestyle.  5 cities in 3 different continents will be hosting live music performances that anyone can view through all MTV Push pages and the new ck one website.  The venues have not been officially released yet and the dates and artists will be announced at a later date.

ck one will also exclusively present the award in this year’s “Breaking Woodie” category at the “2011 mtvU Woodie Awards” – which will air live from Austin, Texas on Wednesday, March 16th during the South by Southwest Music Festival – and be the first in the series of global music events sponsored by ck one. Nominees in the “Breaking Woodie” category include Local Natives, Sleigh Bells, Dev, Waves, and Two Door Cinema Club, and will be voted on by viewers via a tally of all Tweets and Facebook posts that include a nominee’s official “@” Twitter handle or the hashtag “#Woodies.” In addition, in the U.S., ck one will be the exclusive MTV PUSH sponsor during “Indie Music Month” which runs throughout March 2011, in support of artists ranging from Graffiti6 to “2011 mtvU Woodie Award” performers Wiz Khalifa, Sleigh Bells, Odd Future Wolf Gang Kill Them All and Two Door Cinema Club, and more.” — www.fashionandrunway.com

Calvin Klein is one of the top names in fashion and is now welcoming in the music industry… what can’t this company do?

Golzar Amirmotazedi is getting another fifteen minutes of fame.  This name may sound familiar to fans of Real World because she appeared in an episode filmed in Washington D.C..  In this episode she, along with the other cast members, started drinking heavily and started making hurtful and offensive comments toward Amirmotazedi.  Supposedly she became so intoxicated while she was there that she was not capable of comprehension.  Before she left, Golzar was required to sign a waiver form allowing MTV to let her appear on the episode.  This makeup consultant and hairstylist is attempting to sue Viacom and MTV for 5 million dollars.  So far she has gotten U.S. District Judge Gladys Kessler to let the lawsuit go further because a highly inebriated person cannot legally enter a contract.  How will this lawsuit effect Viacom, MTV, and the future of Real World?  If this they lose this case it could mean trouble for many reality tv shows.

The Parent’s Television Council has orchestrated a collective wag of the finger to Viacom due to its broadcasting of the controversial MTV show “Skins.” This show is an American adaptation of a British show in which underage teens parade around the city engaging in debauchery of all sorts. The parents of the PTC argue in an e-mail to 200,000 of its 1.3 million members that the show is targeting and corrupting younger audiences, and even though the show’s ratings have been falling and the show has been losing money, Viacom and MTV continue to produce the show. The e-mail, which places blame primarily on Viacom higher ups and MTV as a whole, contains a link to forward the message to Viacom. They argue that Viacom is breaching their economic policy in that they are sponsoring a show that is losing their shareholders money. The recent events have undoubtedly had a negative impact on Viacom’s image, though they refused to comment on the story.

The cast from the American Skins

Two brief excerpts from the e-mail:

“Viacom has one prime directive as a publicly traded company: to return a profit to its shareholders. In allowing one of its properties, MTV, to continue to air a program that is losing the company money, Viacom is in breach of its fiduciary responsibility to its shareholders.”

“MTV has an agenda to push, and they are going to push it at all costs. They are determined to rewrite the rule book for television standards, forever lowering the threshold for what can and should be permitted on advertiser-supported basic cable.”

Will Gillette and Rick Grider